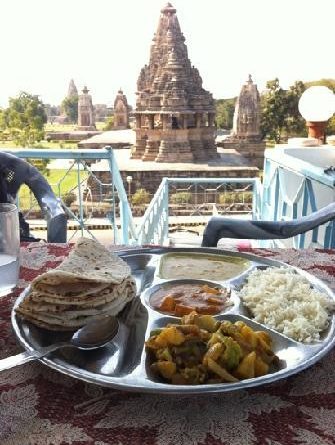 Khajuraho belongs to the Bundelkhand region in Chhatarpur district in Madhya Pradesh. Bundelkhand is a district wherein a part of it lies in Madhya Pradesh and the other in Uttar Pradesh. Thus, migrants from neighbouring states brought their cuisines with them and so those cuisines got mingled with the local cuisine in the last few years. Thus even though the city of Khajuraho has emerged as a tourist destination, it is also home to some of the well preserved, local and best kept culinary secrets.  The Hindu Rajput kings had ruled over during a large existence in Khajuraho, so the food during this era was more of a vegetarian affaire.

Since Khajuraho is a tourist destination, it caters to a large multi-cultural and multi-ethnic influx of options of food for every want and need. Raja Cafe located opposite to the Western Group of Temples, is one of the top cafes in Khajuraho is noted for its English breakfasts, wood-fired pizzas, various Indian, Italian and Chinese dishes.  Just a stone throw away are two good Italian restaurants, called ‘Mediterraneo’ and ‘La Bella Italia’  that serves decent pastas, piazzas etc. Also, near the Western Group of Temples, one can try the local sweets like ‘chironji barfi’ (which is a nut and condensed milk sweet) and ‘Ghol’ (which is dried fruit, ghee and black sugar).

There are numerous options for street food joints in various parts of the city. Since most of the temples are in the Silent Zone area, these food joints are located a bit away from the main temples. ‘Evening Food stalls’ open up after sunset towards the west end of Jain Temples Road sells omelettes, momos, paneer patties and some South Indian delicacies are worth trying. Some dishes like ‘chaats’, ‘bhajiyas’, ‘jalebis’ and the local Dal Bafla are some of the popular items where one can try and check with the locals on other Street Food joints and locations. 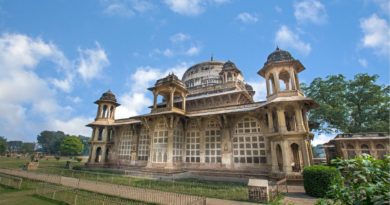 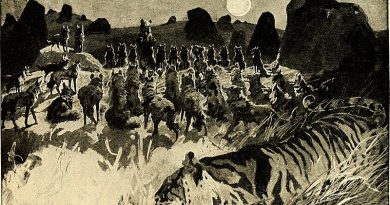