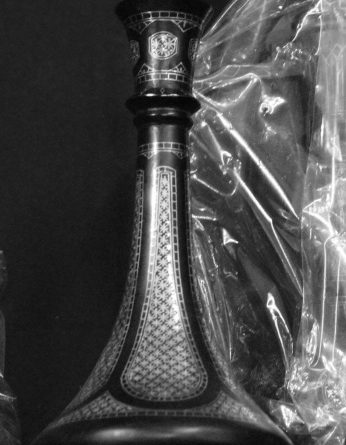 Shirin Jaini, along with her project members at National Institute of Fashion Technology, studied and documented textiles and related crafts in Aurangabad, Maharashtra. They worked with Paithani and Himroo craftsmen from Aurangabad in Maharashtra and Bidriware craftsmen from Bidar in Karnataka. They also studied and analyzed problems within the industry and offered product and process based solutions. This project was undertaken for the Ministry of Textiles, Government of India under the Craft Cluster Initiative.

You can find their entire project here & here.

Below is an excerpt from their findings on Bidriware:

Bidriware is a metal handicraft that originated in Bidar, Karnataka, in the 14th century C.E., during the rule of the Bahamani Sultans. The term ‘Bidriware’ originates from the township of Bidar, which is still the chief centre for the manufacture of the unique metalware.

Due to its striking inlay artwork, Bidriware is an important export handicraft of India and is prized as a symbol of wealth. The metal used is a blackened alloy of zinc and copper inlaid with thin sheets of pure silver.

The origin of Bidriware is usually attributed to the Bahamani sultans who ruled Bidar in the 13th–15th centuries. Abdullah bin Kaiser, a craftsman from Iran was invited by the Sultan to work on decorating the royal palaces and courts.

According to some accounts, Kaiser joined hands with local craftsmen and gave birth to Bidriware. Since then, the craft has been handed down succeeding generations mostly among the local Muslim and Lingayat sects.

The design sense involved in the making of Bidriware is vastly inspired the designs etched into the ceilings and walls of the Bibi ka Maqbara, a mosque commissioned by the sixth Mughal Emperor Aurangzeb in the late 17th century in the memory of his first wife, Dilras Banu Begum.

Geometricals designs, florals inlays, criss-cross patterns, roses, et ectera are heavily influenced by the architure of the monument. Having orginated in Karnataka, the Bidriware seen in Auranagabad thus displays its own spirits through design elements incorporated in the craft after the construction of the regal structure.

Bidriware is manufactured from an alloy copper and zinc (in the ratio 1:16) by casting. The zinc content gives the alloy a deep. The zinc content gives the alloy a deep black color. First, a mould is formed from soil made malleable by the addition of castor oil and resin. The molten metal is then poured into it to obtain a cast piece which is later smoothed by filing. The casting is now coated with a strong solution of copper sulphate to obtain a temporary black coating over which designs are etched freehand with the help of a metal stylus called a ‘kalam’.

These kalams come in a variety of sizes with varied sharpness. All the Bidri design are made freehand straight on article. But simple aids such as a compass help in the correct positioning and arrangement of intricate design. Fine wire or flattened strips of pure silver are then carefully hammered into these grooves.

The article then is filed, buffed and smoothed to get rid of the temporary black coating. This results in rendering the silver inlay hardly distinguishable from the gleaming metallic surface which is now all silvery white.

The bidriware is now ready for the final blackening process. Here, a special variety of soil which is available only in the unlit portions of the Bidar fort is used. It is mixed with ammonium chloride and water to produce a paste which is then rubbed onto a heated bidri surface. The paste selectively darkens the body while it has no effect on the silver inlay.

The paste is then rinsed off to reveal a shiny silver design resplendent against the black surface. As a finishing touch, oil is applied to the finished product to deepen the matt coating. The finished product appears black with brilliant silver inlay.

Bidri artisans tell that identifying good quality of soil from the fort or graveyards is done by tasting it with the tip of the tongue and this knack is passed on from generation to generation. It is supposed to be slightly pungent.

The different kinds of Bidri work in the past are Tar Kashi(inlay of wire), Taihnishan(inlay of sheet metal), Aftabi(cut out design in metal overlay), Zar Nishan(low relief pattern) and Zar buland(pattern in high relief).

The Bidri designs are usually patterns such as the Asharfi-ki-booti, stars, vine creepers and stylized poppy plants with flowers. Traditional designs include the Persian Rose and passages from the Quran in Arabic script.

A collection of Bidri articles form a part of the dowry of a daughter in a wealthy Muslim home, and the articles were collected for over a period of years, more for their finely executed designs than for their utility.

Traditional designs are still very popular such as the Laljungle, the intricate pattern of leaves and flowers which is reminiscent of the background of the frescoes in Ajanta and finds a parallel in Himroo work. Phool Jadi, another design showcase closely clustered stars. The lotus, rose and poppy in stylised forms are also popular. Sometimes calligraphy is seen when a verse from the Koran is used to embellish an article.

The Greek or Chinese key design is used in bands and other articles like trays. Geometric designs using an inverted ‘V’ combined with wavy lines are very effective. 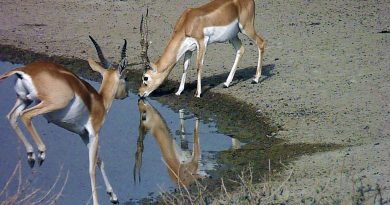 The Blackbucks of Bidar 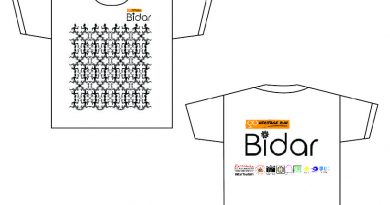 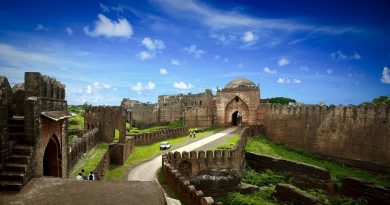 One thought on “Bidriware: A report by students of NIFT India”